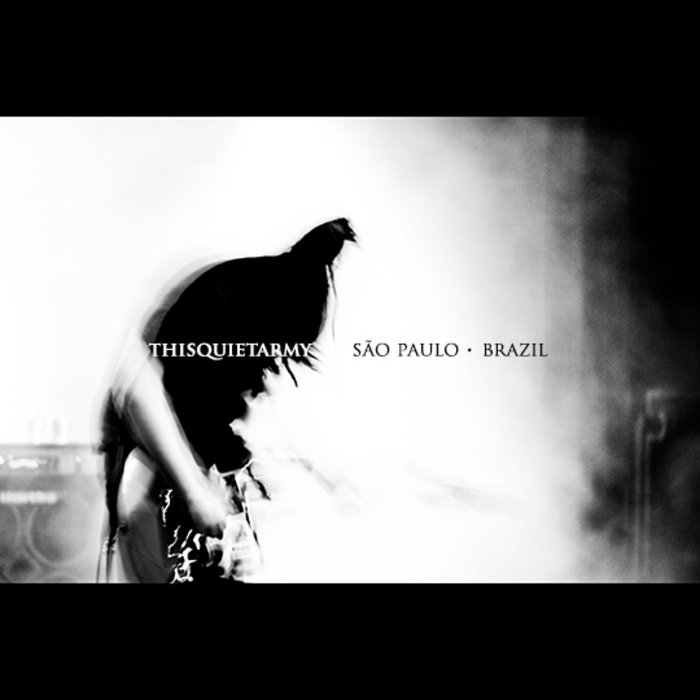 This is the complete thisquietarmy live performance that took place at Centro Cultural Sao Paulo in Brazil on June 23rd, 2013. The concert marked the end of the TQA Brazilian tour where he performed 14 shows through May & June 2013 to promote the split LP with Sao Paulo-based band Labirinto released on Dissenso Recordings.

For this "homecoming" Brazilian gig, thisquietarmy performs a special encore with two members from Labirinto: Muriel Curi on drums/electronics & Ricardo Pereira on bass.

The DVD compiles and crossovers video footage by Claud Peer & Rodrigo Florentino with thisquietarmy's live visuals and the live soundboard audio recording from CCSP. The whole thing was entirely edited & mastered by Eric Quach back at TQA.HQ in Montreal, Canada.

The DVD includes 4 live photographs of the performance by Daniel Moura, and the package was designed, printed, hand-cut and assembled by Eric Quach/TQA Records. The DVDs are silver/black DVD-Rs, burnt as NTSC and should work on all new DVD players and DVD-roms.

The EU tour version made available during thisquietarmy's tour from Oct. 16th to Nov. 16th in Spain, Portugal, France, Italy, Switzerland, Belgium, Germany was limited to 100 copies - there are still some left in Belgium through ConSouling.

This is the mailorder version, limited to 200 - printed on solar white envelopes. The only difference is that the EU tour version was printed on light grey envelopes, stamped as a "limited tour series edition" and included the download code of the audio - thus warranted the higher price in EU currency on the merch table.

The digital audio can be purchased separately here: tqarecords.bandcamp.com/album/tqa028-thisquietarmy-live-ccsp-sao-paulo-brazil

Bandcamp Daily  your guide to the world of Bandcamp

Interviews With Butcher Brown and Slauson Malone, plus LP of the week by SAULT.